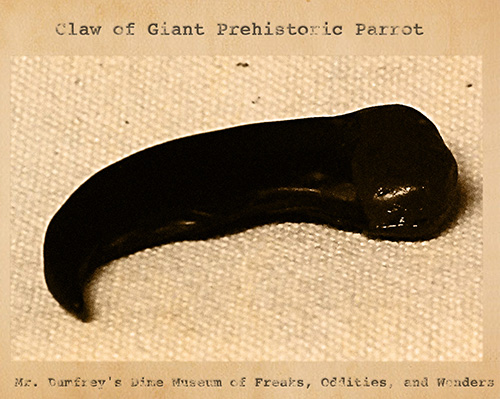 Once upon a time there was a beautiful jungle island, for many years now submerged in the depths of the ocean, which was inhabited only by huge, gigantic Parrots. It was a green place, full of sweet nectar, and all the seeds a bird could want.

It was also completely wordless. The Parrots of Parrot Island could speak, indeed, they could recite whole Shakespearean soliloquies if given the chance, but they could not come up with any words of their own. They could only repeat words they'd already heard, and since they were the only creatures on the island, they had no words to use.

The Parrots got along fine, of course. They communicated with wild wiggles and complicated wing dances. The only one who struggled was a Lady Parrot named Nalani, who was born with a twisted foot, and a broken wing. She tried to shake and shimmy like the rest of the birds, but her meaning was often mistaken. Still, everyone loved her, because she had the sweetest voice, and her wordless songs brightened everyone's waking hours.

Nalani had a secret, which is that she was in love. Thoughts of the barrel-chested Gentleman Parrot Chakrii had filled her heart and soul since she'd first seen him dance. She'd tried to tell him of her feelings many times, but he always misunderstood them for gestures of friendship. Every time he danced the friend dance for her, it broke her heart, and made her love him even more.

One evening Chakrii took Nalani down to the beach, to try the seeds from a purple berry she especially liked. He walked when she couldn't fly anymore, and helped her over the largest fallen branches. They snacked on the berries, and Nalani searched her brain for some way to show him how she felt.

Just then, from some passing ship, a clear voice came from over the water. It sang:

In the magical way of Parrots, Nalani instantly recognized the meaning of the words. Finally having what she was always needing, she turned to Chakrii and repeated them to him in her most beautiful singing voice.

It didn't take three seconds before he sang them back to her. For the rest of their lives, although those were the only words they could speak to each other, they knew they were the only ones that they needed.