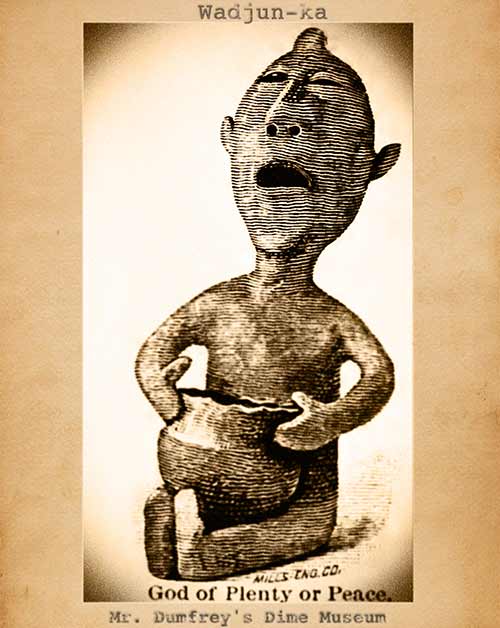 A strange legend attaches itself to the figurine of Wadjun-Ka, the God of Plenty or Peace, which goes as follows: years ago it came into the possession of a narrow-minded, greedy bank teller in New York City by the name of Amos Bostwick. Now Bostwick himself felt the thing was ugly and likely worthless when he first came across it in the back of a dusty antique shop. But his wife, a mild and sweet-tempered woman named Philene, was enamored of it. She had for years been trying to have a baby, you see, and she felt that with the god of plenty on her side, she would surely not fail to produce one.

So they took the statue and Bostwick hid it in a corner of his study, and, lo and behold, only a few months later Philene became pregnant. She was ecstatic. Her husband was less so, especially when the baby came--a beautiful, dark-haired girl they named Lydia, with the same sweet temper as her mother--and the bills began to pile up. Dresses and dance lessons, pinafores and sweets, dolls and riding boots, ballet slippers and a miniature piano. Every time he signed a check he felt his heart shrivel with rage, and though they were perfectly comfortable he began to think of nothing but money, money, and more money.

He began to hide money wherever he could, then claim to his wife he had none--when, for example, she came to ask him for a pair of shoes for their daughter to replace those that had worn out. One day, as he was sitting at his study desk with his back to the door, counting a stack of silver dollars, he heard someone enter. Quickly, before the person could see what he was doing, he shoved the coins into the open mouth of the little statue. When Lydia--for that’s who it was--asked if she might have a nickel for an ice cream cone, he regretfully informed her that he had no money and suggested that she go drink a nice, ice-cold glass of water instead. Imagine his surprise when, after she had gone, he turned back to the statue and discovered that the little bowl clasped between its hands was now overflowing with twice the number of silver coins as he had stuck down its throat--as if the statue had spat up the silver dollars and in the process caused them to multiply.

Intrigued, he repeated the trick again, and again the quantity of coins was doubled. Now breathless with excitement, he unscrewed his watch and fed it into the statue's mouth. A second later, two identical watches lay together in the bowl.

You know, I'm sure, what happened next. As soon as the bank opened the next morning, he practically flew there and withdrew all of his money in the form of gold coins. These he fed one by one into the mouth of Wadjun-Ka, receiving two coins back for every one he inserted, and then reinserting each of these two coins to receive four more, and so on and so on, and at the end of that night he was the richest man in the whole city.

He, his wife, and daughter moved into a mansion as big as five of their old houses combined. His daughter now had a stable full of horses, a room full of shoes, a gallery of pianos, and her own private ballet studio. Still, he couldn't stop. He no longer left his study. He skipped meals and obligations and quit his work. He spent hour after hour feeding coins into Wadjun-Ka's mouth, feeling a thrill anew every time the doubling occurred, building towers upon towers upon stacks and stacks of gold, so much gold all around him that slowly, very slowly, he was hemmed in entirely. And suddenly, as though awakening from a daze, he realized he was all alone, and couldn't see the door; and that he was scared, and didn't know what time it was or what year it was or whether or not he was old or young; and when he cried out for help the sound was absorbed by those shimmering walls of money money; and when he tried to stand the whole prison of gold came down on his head, and buried him.